Living Seas Trainee
It was a beautiful sunny morning on 25 July, great weather for some shark and skate egg case hunting!

Jade Berman, the Living Seas Manager and I headed off to Portballintrae and set up base at the Coast Office.

When all of our eager participants had arrived, Jade passed around various examples of egg cases, as well as some very cute shark and skate cuddly toys to give us an idea of what we were looking for and where they come from. After a quick safety chat and our usual “avoid the green bits” warning, we were all set to go.

As we started walking along the beach it didn’t take long until the first egg case was found. As more were found we used a key to identify which species it belonged to. Some were more difficult to identify than others as they were looking a bit worse for wear. But we did our best and collected various species including the lesser spotted dogfish (or small spotted catshark – confusing I know), cuckoo and spotted rays, and one thornback skate egg case. We also managed to teach everyone a little bit about some other marine creatures including periwinkles, hermit crabs, edible crabs, shore crabs and sand eels as we spotted them along the shore.

Walking along looking for egg cases I couldn’t help but do a small litter pick-up, as there were lots of little pieces of plastic and fishing line scattered across the beach. Along with some willing helpers we filled a bin bag with rubbish.

Over 50 people joined us on our Egg Case Hunt, and we were all successful in finding at least one egg case along the beach! It was great to see such a huge interest, and from this we can now add valuable data towards our SeaDeep Project. If you are at the beach and find any egg cases, we would love for you to tell us about it! Every piece of data we collect helps us learn vital information such as locations of spawning and nursery grounds, which continues to build our case for higher levels of protection for these amazing creatures. 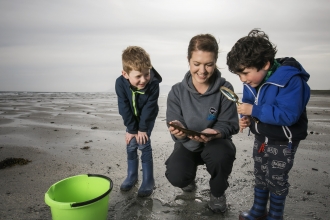 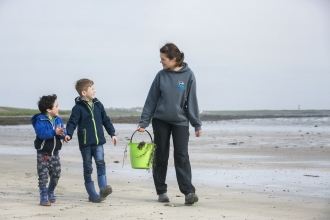 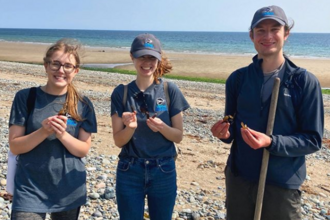